As shown in Figure, a general shear failure involves total rupture of the underlying soil. There is a continuous shear failure of the soil (solid lines) from below the footing to the ground surface. When the load is plotted versus settlement of the footing, there is a distinct load at which the foundation fails (solid circle), and this is designated Qult. The value of Qult divided by the width Band length L of the footing is considered to be the ultimate bearing capacity (qult) of the footing. The ultimate bearing capacity has been defined as the bearing stress that causes a sudden catastrophic failure of the foundation.

A general shear failure occurs for soils that are in a dense or hard state. 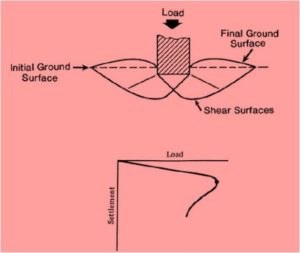 As shown in Figure, local shear failure involves rupture of the soil only immediately below the footing. There is soil bulging on both sides of the footing, but the bulging is not as significant as in general shear.

Local shear failure can be considered as a transitional phase between general shear and punching shear. Because of the transitional nature of local shear failure, the bearing capacity could be defined as the first major nonlinearity in the load-settlement curve (open circle) or at the point where the settlement rapidly increases (solid circle). 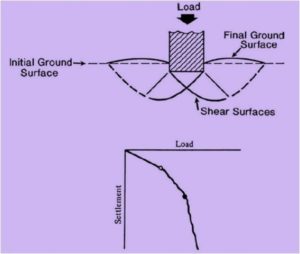 As shown in Figure, a punching shear failure does not develop the distinct shear surfaces associated with a general shear failure. For punching shear, the soil outside the loaded area remains relatively uninvolved and there is minimal movement of soil on both sides of the footing.

The process of deformation of the footing involves compression of soil directly below the footing as well as the vertical shearing of soil around the footing perimeter. As shown in Figure, the load settlement curve does not have a dramatic break and for punching shear, the bearing capacity is often defined as the first major non linearity in the load-settlement curve (open circle). 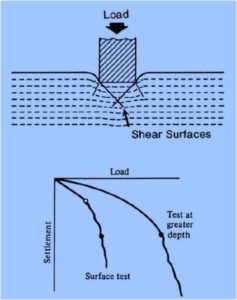