About: Earthquake-resistant structures are structures designed to withstand earthquakes. While no structure can be entirely immune to damage from earthquakes, the goal of earthquake-resistant construction is to erect structures that fare better during seismic activity than their conventional counterparts. According to building codes, earthquake-resistant structures are intended to withstand the largest earthquake of a certain probability that is likely to occur at their location. This means the loss of life should be minimized by preventing collapse of the buildings for rare earthquakes while the loss of the functionality should be limited for more frequent ones. To combat earthquake destruction, the only method available to ancient architects was to build their landmark structures to last, often by making them excessively stiff and strong. Currently, there are several design philosophies in earthquake engineering, making use of experimental results, computer simulations and observations from past earthquakes to offer the required performance for the seismic threat at the site of interest. These range from appropriately sizing the structure to be strong and ductile enough to survive the shaking with an acceptable damage, to equipping it with base isolation or using structural vibration control technologies to minimize any forces and deformations. 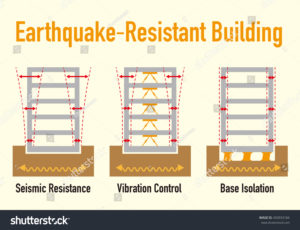 Based on studies in New Zealand, relating to Christchurch earthquakes, precast concrete designed and installed in accordance with modern codes performed well. According to the Earthquake Engineering Research Institute, precast panel buildings had good durability during the earthquake in Armenia, compared to precast frame-panels.

One Japanese construction company has developed a six-foot cubical shelter, presented as an alternative to earthquake-proofing an entire building.

Designed by architect Merrill W. Baird of Glendale, working in collaboration with A. C. Martin Architects of Los Angeles, the Municipal Services Building at 633 East Broadway, Glendale was completed in 1966. Prominently sited at the corner of East Broadway and Glendale Avenue, this civic building serves as a heraldic element of Glendale’s civic center.

A steel plate shear wall (SPSW) consists of steel infill plates bounded by a column-beam system. When such infill plates occupy each level within a framed bay of a structure, they constitute a SPSW system. Whereas most earthquake resistant construction methods are adapted from older systems, SPSW was invented entirely to withstand seismic activity.

The Kashiwazaki-Kariwa Nuclear Power Plant, the largest nuclear generating station in the world by net electrical power rating, happened to be near the epicenter of the strongest  6.6 July 2007 Chuetsu offshore earthquake. This initiated an extended shutdown for structural inspection which indicated that a greater earthquake-proofing was needed before operation could be resumed.

A destructive earthquake struck a lone, wooden condominium in Japan. The experiment was webcast live on July 14, 2009 to yield insight on how to make wooden structures stronger and better able to withstand major earthquakes. The Miki shake at the Hyogo Earthquake Engineering Research Center is the capstone experiment of the four-year NEES Wood project, which receives its primary support from the U.S. National Science Foundation Network for Earthquake Engineering Simulation (NEES) Program.

The proposed system is composed of core walls, hat beams incorporated into the top level, outer columns and viscous dampers vertically installed between the tips of the hat beams and the outer columns. During an earthquake, the hat beams and outer columns act as outriggers and reduce the overturning moment in the core, and the installed dampers also reduce the moment and the lateral deflection of the structure. This innovative system can eliminate inner beams and inner columns on each floor, and thereby provide buildings with column-free floor space even in highly seismic regions.