Surface protection of concrete structural members is necessary to protect the structure from damage due to environmental considerations. Corrosion of reinforcement due to permeability of water / moisture, chemical attack on structural members, structures nearby sea-coast etc. are all responsible for damage to concrete structures. So, surface protection of concrete members becomes necessary to prevent such damages.

Following are the surface protection measures that may be taken to minimize or stop the damage to concrete structures:

Sealers or coatings lead to a closed thin film on the surface of concrete and thus have higher degree of surface protection.

(a) The materials used for impregnation, hydrophobation methods for concrete surface protection are: 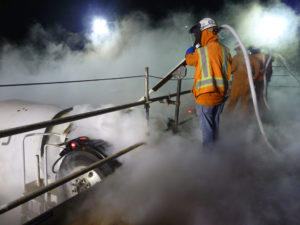 (i) Silicon organic impregnation materials are:

The resins provides protection to concrete surface by forming a thin film on the surface of the pores and narrowing of the capillaries. Types of resin materials used for this are:

(b) Sealers: In contrast to impregnation and hydrophobation, sealers are more effective is protecting the concrete surface by forming a film on the surface. Sealing of concrete surface is achieved by increasing the applied quantity of an impregnation agent, which tends to form a film, or through the choice of suitable resins. The following plastics are commonly used as sealers for concrete surface: 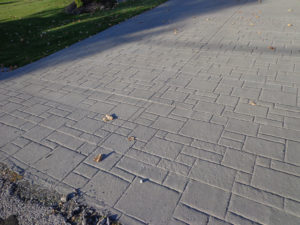 Sealers can also serve as a primer for coatings.

(c) Coatings: Coatings provides additional protection to concrete surface as compared to sealers. Consideration should also be given to the fact that coatings, as compared to sealers, have an increased resistance to the diffusion of internal moisture. There are two types of coatings used, thin coating and a thick coating. Thin coatings follows the contour of any unevenness of the concrete surface. Thick coatings is used to form as much as possible a plain surface with a thickness of 1mm or larger. Therefore, a thick coating will smooth out any unevenness of the surface.

A good coating materials should have following properties:

Coatings are also used for sealing of the cracks in concrete structures. For this, high elasticity coating materials is used. The epoxy systems are known to change their properties with variations in temperature and exposure to sunrays. For thinner layers bridging of cracks can only be achieved when a limited debonding of the coating adjacent to the crack is possible. With such coating, it is possible to bridge cracks up to 0.2mm in width. Bridging of larger crack widths can be achieved by the insertion of a fiber material into the coating, e.g. in the form of textile fabrics. Recently, two component liquid sealers have been developed which can be sprayed onto the concrete surface. They have the ability to bridge larger cracks as a result of their low modulus of elasticity and their improved elongation.

Penetration depth of surface protection material is especially important where wearing of concrete surface is expected. Therefore, impregnation protection systems are only suitable where the concrete surface will not be removed by abrasion, damaged or locally disturbed by the formation of crack. While impregnation with resins may be successfully used on horizontal surfaces, hydrophobizing impregnations are not suitable for horizontal surfaces where water will stay on the surface. Therefore, the primary field of application of hydrophobizing impregnations is on vertical or sloped surfaces, where the water can flow off easily.