Properties of concrete are divide into two major groups:- 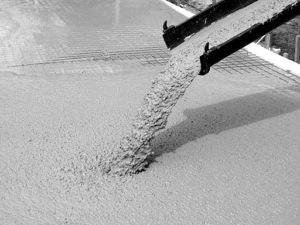 Following are the important properties of fresh concrete

Following are the factors that affect the setting of concrete.

The internal work done required to overcome the frictional forces between concrete ingredients for full compaction. It is obvious that no single test can evaluate all these factors. In fact, most of these cannot be easily assessed even though some standard tests have been established to evaluate them under specific conditions.

In the case of concrete, consistence is sometimes taken to mean the degree of wetness; within limits, wet concretes are more workable than dry concrete, but concrete of same consistence may vary in workability.

Slump Test can be used to find out the workability of concrete.

More the water cement ratio more will be workability of concrete. Since by simply adding water the inter particle lubrication is increased. High water content results in a higher fluidity and greater workability but reduces the strength of concrete. Because with increasing w/c ratio the strength decreases as more water will result in higher concrete porosity. So, the lower the w/c, the lower is the void volume/solid volume, and the stronger the hardened cement paste.

ii. Amount and type of Aggregate

Since larger Aggregate sizes have relatively smaller surface areas (for the cement paste to coat) and since less water means less cement, it is often said that one should use the largest practicable Aggregate size and the stiffest practical mix. Most building elements are constructed with a maximum Aggregate size of 3/4″ to 1″, larger sizes being prohibited by the closeness of the reinforcing bars.

Because concrete is continuously shrinking for years after it is initially placed, it is generally accepted that under thermal loading it will never expand to it’s originally-placed volume. More the amount of aggregate less will be workability.

If wind is moving with greater velocity, the rate of evaporation also increase reduces the amount of water and ultimately reducing workability.

Chemical admixtures can be used to increase workability.

Use of air entraining agent produces air bubbles which acts as a sort of ball bearing between particles and increases mobility, workability and decreases bleeding, segregation. The use of fine pozzolanic materials also have better lubricating effect and more workability.

If the amount of sand is more the workability will reduce because sand has more surface area and more contact area causing more resistance. The ingredients of concrete can be proportioned by weight or volume. the goal is to provide the desired strength and workability at minimum expense. A low water-cement ratio is used to achieve a stronger concrete. It would seem therefore that by keeping the cement content high one could use enough for god workability and still have a low w/c ratio. the problem is that cement is the most costly of the basic ingredients.

Bleeding in concrete is sometimes referred as water gain. It is a particular form of segregation, in which some of the water from the concrete comes out to the surface of the concrete, being of the lowest specific gravity among all the ingredients of concrete. Bleeding is predominantly observed in a highly wet mix, badly proportioned and insufficiently mixed concrete. In thin members like roof slab or road slabs and when concrete is placed in sunny weather show excessive bleeding. 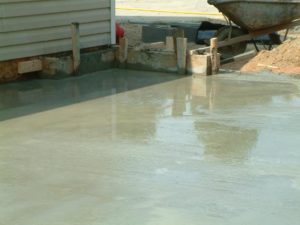 Due to bleeding, water comes up and accumulates at the surface. Sometimes, along with this water, certain quantity of cement also comes to the surface. When the surface is worked up with the trowel, the aggregate goes down and the cement and water come up to the top surface. This formation of cement paste at the surface is known as “Laitance”. In such a case, the top surface of slabs and pavements will not have good wearing quality. This laitance formed on roads produces dust in summer and mud in rainy season.

Water while traversing from bottom to top, makes continuous channels. If the water cement ratio used is more than 0.7, the bleeding channels will remain continuous and un segmented. These continuous bleeding channels are often responsible for causing permeability of the concrete structures. While the mixing water is in the process of coming up, it may be intercepted by aggregates. The bleeding water is likely to accumulate below the aggregate. This accumulation of water creates water voids and reduces the bond between the aggregates and the paste.

The above aspect is more pronounced in the case of flaky aggregate. Similarly, the water that accumulates below the reinforcing bars reduces the bond between the reinforcement and the concrete. The poor bond between the aggregate and the paste or the reinforcement and the paste due to bleeding can be remedied by re vibration of concrete. The formation of laitance and the consequent bad effect can be reduced by delayed finishing operations.

Bleeding rate increases with time up to about one hour or so and thereafter the rate decreases but continues more or less till the final setting time of cement.

Prevention of Bleeding in concrete

Early bleeding when the concrete mass is fully plastic, may not cause much harm, because concrete being in a fully plastic condition at that stage, will get subsided and compacted. It is the delayed bleeding, when the concrete has lost its plasticity, which causes undue harm to the concrete. Controlled re vibration may be adopted to overcome the bad effect of bleeding.

3(b). Segregation in concrete

Segregation can be defined as the separation of the constituent materials of concrete. A good concrete is one in which all the ingredients are properly distributed to make a homogeneous mixture. There are considerable differences in the sizes and specific gravities of the constituent ingredients of concrete. Therefore, it is natural that the materials show a tendency to fall apart.

Segregation may be of three types

A well made concrete, taking into consideration various parameters such as grading, size, shape and surface texture of aggregate with optimum quantity of waters makes a cohesive mix. Such concrete will not exhibit any tendency for segregation. The cohesive and fatty characteristics of matrix do not allow the aggregate to fall apart, at the same time; the matrix itself is sufficiently contained by the aggregate. Similarly, water also does not find it easy to move out freely from the rest of the ingredients.

The conditions favorable for segregation are:

1. Badly proportioned mix where sufficient matrix is not there to bind and contain the aggregates
2. Insufficiently mixed concrete with excess water content
3. Dropping of concrete from heights as in the case of placing concrete in column concreting
4.When concrete is discharged from a badly designed mixer, or from a mixer with worn out blades
5.Conveyance of concrete by conveyor belts, wheel barrow, long distance haul by dumper, long lift by skip and hoist are the other situations promoting segregation of concrete.
6.Vibration of concrete is one of the important methods of compaction.

It should be remembered that only comparatively dry mix should be vibrated. It too wet a mix is excessively vibrated; it is likely that the concrete gets segregated. It should also be remembered that vibration is continued just for required time for optimum results. If the vibration is continued for a long time, particularly, in too wet a mix, it is likely to result in segregation of concrete due to settlement of coarse aggregate in matrix.

Concrete derives its strength by the hydration of cement particles. The hydration of cement is not a momentary action but a process continuing for long time. Of course, the rate of hydration is fast to start with, but continues over a very long time at a decreasing rate In the field and in actual work, even a higher water/cement ratio is used, since the concrete is open to atmosphere, the water used in the concrete evaporates and the water available in the concrete will not be sufficient for effective hydration to take place particularly in the top layer.

If the hydration is to continue, extra water must be added to refill the loss of water on account of absorption and evaporation. Therefore, the curing can be considered as creation of a favorable environment during the early period for uninterrupted hydration. The desirable conditions are, a suitable temperature and ample moisture.

Concrete, while hydrating, releases high heat of hydration. This heat is harmful from the point of view of volume stability. Jeat of hydration of concrete may also shrinkage in concrete, thus producing cracks. If the heat generated is removed by some means, the adverse effect due to the generation of heat can be reduced. This can be done by a thorough water curing.

1.Resistance to freeze–thaw action in the hardened concrete.
2.Increased cohesion, reducing the tendency to bleed and segregation in the plastic concrete.
3.Compaction of low workability mixes including semi-dry concrete.
4.Stability of extruded concrete.
5.Cohesion and handling properties in bedding mortars.