There are chances that you’ve probably seen them hovering over a construction site, capturing photos and collecting data. Maybe your company has even used them to do some surveying or to monitor progress on a job. We’re talking about drones, or more correctly unmanned aerial vehicles (UAVs), and construction firms are realizing the many benefits this technology can provide.

What is a Drone?

Unmanned aerial vehicles (UAVs, also known as “drones”) are changing the way construction companies do business. Contractors are increasingly using camera-mounted UAVs to monitor their construction activities. These devices provide a way to obtain real-time data on job progress, may identify potential hazards or quality issues, and help acquire other useful information in a very expeditious and cost-effective manner. The larger the construction site the more helpful they are in monitoring the project. 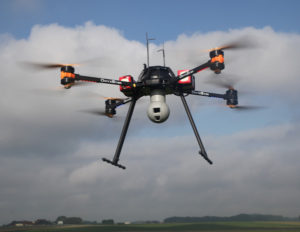 UAVs can be equipped with high-speed HD cameras having capability of taking stills and video to provide aerial imaging which can then be used to create maps and 3D models of construction project sites. LiDAR, laser scanning, and other sensors are also being used to map and model sites. UAVs can operate autonomously using predefined flight paths they can be flown manually using a remote control, some can even be operated using a smart phone or tablet.

Construction firms that are currently using airplane and helicopter services to provide their aerial imagery are going to see huge cost savings by either purchasing and operating their own UAVs or by hiring out the work to a company equipped to provide imaging with UAVs.

UAVs are going to play a significant role in the construction industry. Mapping and surveying of sites, performing building inspections and jobsite safety are all areas that will benefit from the use of UAVs. Video footage taken with UAVs can be used to create 3D images of real-time construction progress. That information can be compared against the architectural plans and construction schedule to accurately monitor the progress of a project. It will not only help to keep projects on schedule, but will also be able to determine if construction work is deviating from the design. On excavation and site work projects, UAVs can be used to calculate volumetric measurements to compare how much dirt has been moved each day.

Two areas that UAVs could help improve, worker safety and worker productivity, will probably receive the most pushback from workers over privacy concerns. Construction site are already closely monitored by safety managers, site superintendents and construction managers so this shouldn’t be a major issue. UAVs could cover an entire site in a fraction of the time it would take a person walking and stopping to monitor work and making note of potential safety hazards. Ideally the technology would be used to better protect workers and to identify ways to make workers more productive. UAV’s can be fitted with tablets to enable video-conferencing which could lead to better communication on the jobsite.

UAVs could also be used once everyone has left work for the day. Surveillance UAVs could be deployed to monitor the site for trespassers and would-be thieves. These could be deployed automatically fly along a preprogrammed route to hover above a construction site, possibly eliminating the need for numerous security cameras.  Alerts could be immediately sent to owners, GCs and local authorities if unauthorized access is detected.

Research on construction-related applications is being done to determine additional ways UAVs can best serve the industry. A number of construction firms, UAV manufacturers and universities are conducting studies and doing performance tests to see how UAV’s can handle on tasks such as bridge inspections, roof inspections and even performing physical work such as welding.

Companies making Drones like Krespy and Precision Drone are making UAV systems for commercial use in industry like agriculture, mining and construction. Phoenix Aerial Systems makes both UAVs and LiDAR mapping systems that can be used in conjunction with each other or separately. Surveying and navigation equipment manufacturers like Topcon and Trimble are also providing UAVs for the construction industry. 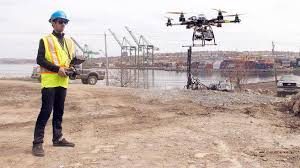 Use of Drones in Indian Construction Industry:

Indian Railway has used drones for the first time for inspecting a mega rail project to assess the progress on the ground and the flying machine would now be used to monitor other under-construction schemes. An unmanned aerial vehicle, also called drone, was used to inspect the ongoing work on the Dedicated Freight Corridor (DFC) project and, as per the plan, all ongoing projects will be monitored through aerial survey. Besides, the public sector behemoth has also decided to use drones to assess the ground situation in the aftermath of train accidents.

The government of India has also granted permission to the Gas Authority of India Limited (GAIL) to use drones for aerial surveillance of its pipelines. This follows the use of drones for similar purposes by the Indian Railways and the National Highways Authority of India. The drones will carry out surveillance using high-resolution and infrared cameras. NHAI signed a pact with the Indian Space Research Organization’s National Remote Sensing Centre and the North East Centre for Technology Application and Research for the use of UAVs to aid in surveillance of construction work.

3. Up in the Air: The emerging issue of drones in the construction industry, John Babel