Permeable pavement is a type of pavement that allows rainfall to percolate to an underlying reservoir base where rainfall is either infiltrated to underlying soils or removed by a subsurface drain.

Standard pavements constructed with asphalt and concrete are considered to be “impermeable.” Rainfall on impermeable pavements cannot flow through the surface to the soils below, but runs to the lowest points to be drained away.

Permeable pavements are alternatives to traditional impervious asphalt and concrete pavements. Interconnected void spaces in the pavement allow storm water to filter through the soil below the paved surface, reducing the numerous environmental issues associated with water runoff.

Just as drinking water can be filtered to remove impurities, the soil particles filter rainwater percolating through soil on its way from surface waters to groundwater aquifers.

This important step in the natural process of water purification is bypassed when rainwater falls on impermeable pavement surfaces or roofs and is carried directly through storm drainage systems into waterways.

Natural filtration of water through soil is the simplest way to control these pollutants, and is a direct advantage of permeable pavement.

Cross-Section of a Permeable Pavement System

Generally, all permeable pavement types have the same general structures as shown in fig. 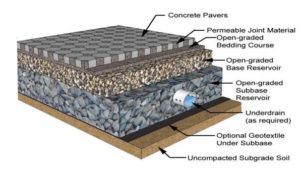 Pervious material (pavers) and fill are considered surface layer or cover. This forms the top layer which is exposed outside. It is identified by the type of pavement used, such as permeable concrete, permeable interlocking concrete pavers filled with gravel etc.

Bedding layer is the material on which the paving units are bedded, facilitating the free passage of water through the underlying sub-base layers.

Gravel base in Permeable Pavement System

Gravel base in permeable pavements lies beneath the surface layer. Like in case of other pavement types, permeable concrete does not require a gravel or aggregate support layer to bear the loads of vehicles. Gravel base also stores water during and immediately after a storm.

Despite the fact that permeable concrete does not need an aggregate base layer for structural support, such a layer is often included in permeable concrete designs so that additional water can be stored. The sub-base layer is often the main load-bearing layer of a permeable pavement. It is designed to evenly spread the load of the paving to the subgrade below. A well-constructed sub-base in pavements helps in drainage and prevents settlement and channelization.

Subgrade is the soil layer immediately below the base layer of pavements. The subgrade is compacted during construction of the permeable system. Subgrade is also known as in situ soil or underlying soil or Formation Level which is the level at which excavation ceases and construction starts: it’s the lowest point of the pavement structure.

Use of Geotextiles in PPS

Geotextile help to prevent sand from migrating into the base of permeable pavement system. In a permeable base course, the presence of geotextile helps to reduce the rutting depth and rate of block breakage, maintaining a good level of pavement serviceability such as easy cleaning.

Runoff: Amount of water leaving (or shedding) the surface of the pavement. This water enters the storm sewer network.

Drainage: Water that has passed through the surface of the pavement may still be recollected in under- drain pipes. This water is also discharged to the storm sewer network.

Exfiltration/Infiltration: Water that leaves the bottom or sides of the pavement and enters the soil. Water exfiltrates from the pavement base layer. It infiltrates the surrounding soil.

Evaporation/Evapotranspiration: Water stored in puddles on an impermeable surface or temporarily trapped near the surface of pavement will eventually evaporate to the atmosphere. If plants aid in the release of water to the atmosphere, as some permeable pavements are designed to be vegetated, this process is termed evapo­transpiration.