Concrete
Concrete is a stone like substance obtained by permitting a carefully proportioned mixture of cement, sand and gravel or other aggregate and water to harden in forms of the shape and of dimensions of the desired structure.

Reinforced cement concrete
Since concrete is a brittle material and is strong in compression. It is weak in tension, so steel is used inside concrete for strengthening and reinforcing the tensile strength of concrete. The steel must have appropriate deformations to provide strong bonds and interlocking of both materials. When completely surrounded by the hardened concrete mass it forms an integral part of the two materials, known as “Reinforced Concrete”. 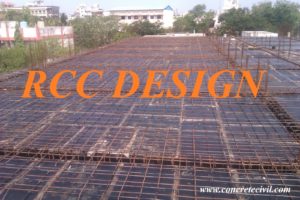 Advantages and disadvantages of reinforced concrete

Reinforced Concrete is a structural material, is widely used in many types of structures. It is competitive with steel if economically designed and executed.

The design of a structure may be regarded as the process of selecting proper materials and proportioned elements of the structure, according to the art, engineering science and technology. In order to fulfill its purpose, the structure must meet its conditions of safety, serviceability, economy and functionality.

It is based on the ultimate strength of the structural members assuming a failure condition, whether due to the crushing of concrete or due to the yield of reinforced steel bars. Although there is additional strength in the bar after yielding (due to Strain Hardening), this additional strength in the bar is not considered in the analysis or design of the reinforced concrete members. In the strength design method, actual loads or working loads are multiplied by load factor to obtain the ultimate design loads. The load factor represents a high percentage of factor for safety required in the design. The ACI code emphasizes this method of design.

This design concept is based on elastic theory, assuming a straight line stress distribution along the depth of the concrete. The actual loads or working loads acting on the structure are estimated and members are proportioned on the basis of certain allowable stresses in concrete and steel. The allowable stresses are fractions of the crushing strength of concrete (fc’) and the yield strength (fy). Because of the differences in realism and reliability over the past several decades, the strength design method has displaced the older stress design method.

It is a further step in the strength design method. It indicates the state of the member in which it ceases to meet the service requirements, such as, loosing its ability to withstand external loads or local damage. According to limit state design, reinforced concrete members have to be analyzed with regard to three limit states:

The aim of this analysis is to ensure that no limiting sate will appear in the structural member during its service life.

Reinforced concrete’s sections are heterogeneous, because they are made up of two different materials – steel and concrete. Therefore, proportioning structural members by ultimate stress design is based on the following assumptions:

Structural members must be designed to support specific loads. Loads are those forces for which a structure should be proportioned. Loads that act on structure can be divided into three categories.

Dead loads are those that are constant in magnitude and fixed in location throughout the lifetime of the structure. It includes the weight of the structure and any permanent material placed on the structure, such as roofing, tiles, walls etc. They can be determined with a high degree of accuracy from the dimensions of the elements and the unit weight of the material.

Consists mainly of snow loads, wind pressure and suction, earthquake loads (i.e inertial forces) caused by earthquake motions. Soil pressure on subsurface portion of structures, loads from possible ponding of rainwater on flat surfaces and forces caused by temperature differences. Like live loads, environmental loads at any given time are uncertain both in magnitude and distribution.

Different factors are used for different loadings. As dead loads can be estimated quite accurately, their load factors are smaller than those of live loads, which have a high degree of uncertainity. Several load factor conditions must be considered in the design to compute the maximum and minimum design forces. Reduction factors are used for some combinations of loads to reflect the low probability of their simultaneous occurrences. Now if the ultimate load is denoted by U, the according to the ACI code, the ultimate required strength U, shall be the most critical of the following:-

In addition to the load factors, the ACI code specifies another factor to allow an additional reserve in the capacity of the structural member. The nominal strength is generally calculated using accepted, analytical procedures based on statistics and equilibrium. However, in order to account for the degree of accuracy within which the nominal strength can be calculated and for adverse variations in materials and dimensions, a strength reduction factor (Ø) should be used in the strength design method. Values of the strength reduction factor Ø (Phi) are:

For flexure of tension controlled sections Ø = 0.9

For compression members with spiral reinforcement Ø = 0.70

For compression members with laterla ties Ø = 0.65

Actual strength from the material properties is called the nominal strength.

As safe design is achieved when the structural strength obtained by multiplying the nominal strength by the reduction factor Ø, exceeds or equals the strength needed to withstand the factored loads.

Slabs are horizontal slab elements in building floors and roof. They may carry gravity loads as well as lateral loads. The depth of the slab is usually very small relatively to its length and width.

Long horizontal or inclined members with limited width and height are called beams. Their main function is to transfer loads from the slab to the columns.

Columns are vertical members that support loads from the beam or slabs. They may be subjected to axial loads or moments.

Frames are structural members that consists of combination of slab, beams and columns.

Footings are pads or strips that support columns and spread their load directly to the soil.

ACI code limits the amount of reinforcement in terms of a minimum net tensile strain of = 0.005 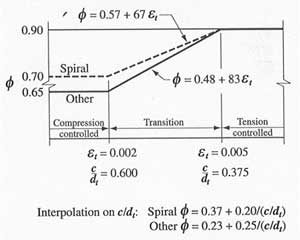 If the external moment applied on the beam is very small and the dimensions of sections are specified (as is sometimes required architecturally) and are large than needed to resist the external ultimate moment, the calculations may show that very small or no steel reinforcement is required. In this case the maximum tensile stress due to bending moment may be equal to or less than the modulus of rupture of concrete.

If no rinforcement is provided, sudden failure will be expected when the first crack occurs, thus giving no warning. ACI code specifies a minimum steel area.

and determine the resulting compression steel area As1 = As and rentaively assume that fs = fy, then

The revised compression steel area acting at fs must provide the same force as the trial steel area that was assumed to act at fy.

Tensile steel area need not to be revised because it acts at fy, as assumed.