In Shanghai in 2009, a newly built but vacant apartment building collapsed, killing one worker. An investigation found that dumping excavated soil on a nearby river bank had caused ground instability causing the building to collapse. The collapse of the vacant apartment building triggered an investigation into the rest of the buildings in the project. Considering the size of the building, it was a miracle that the death toll was not higher. 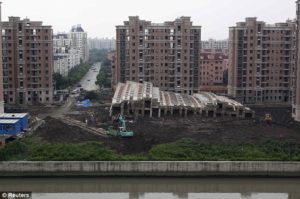 In 1981, 114 people were killed and over 200 injured when two walkways at the Hyatt Regency hotel in Kansas City, fell four floors onto the lobby below where a dance competition was being held. The catastrophe was considered the deadliest structural collapse in US history until the 2001 World Trade Centre attack. An investigation found that, due to last minute design changes of the walkway meant that the tie rods and support beams were forced to hold the weight of both the second floor walkway and the fourth floor walkway. The added weight of the people on the walkway was simply too much for the ties and beams to hold. $140 million in compensation was given to the victims and their families. 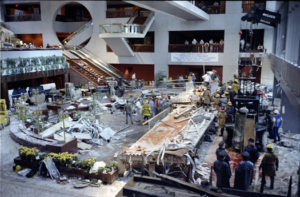 The original Tacoma Narrows Bridge was built in 1940 and was the third largest suspension bridge in the US at that time, spanning nearly 6000 feet. It opened on July 1st 1940, but just several months later, in November 1940, 40 mph winds caused the bridge to collapse sending it crashing into into Puget Sound. Miraculously, not a single person was killed. The collapse of the bridge went onto influence how future bridges were built and how engineers approached bridge aerodynamics. 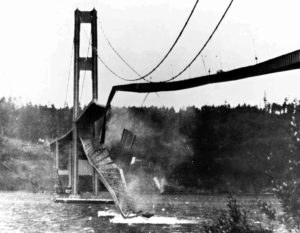 In 1987, work began on the Sampoong Department store in Seoul, South Korea. Originally planned to be an apartment block, the developers changed their mind and decided to build a department store instead, which meant that some support columns had to be left out to make room for escalators. The developers also wanted to add a fifth floor for restaurants. Many building companies refused to make the changes, stating that they were unsafe but eventually the developer found a company that would build what they wanted. The department store opened in 1990, attracting close to 40,000 visitors a day. In April 1995, cracks began to appear on the 5th floor ceiling forcing the store to close the fifth floor. Just two months later in June 1995, the south wing of the building collapsed. The Sampoong Department collapse is considered one of the deadliest building collapses killing 502 people and injuring more than 1,500. An investigation proved the cause to be the developer’s inability to abide by building standards and the addition of a fifth floor. 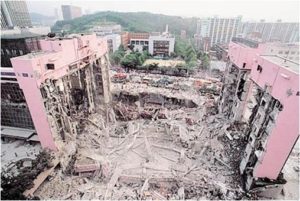 The Leaning Tower of Pisa, Italy

Although The Tower Of Pisa is no imminent risk to human safety today, it is the most obvious example of a construction error. After being been built with an inadequate foundation on soil that could not support the weight of the structure, the tower started to tilt during the construction phase. During the 19th and 20th century, attempts were made to fix the tower which succeeded in decreasing the angle of incline from 5.5 degrees to 3.9 degrees. 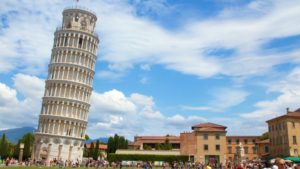 In 2013, the eight- story Savar building collapsed killing more than 1,100 people. The Building was first built without authorisation and converted from commercial use to industrial use. Three floors were added without permission and substandard construction material was used. 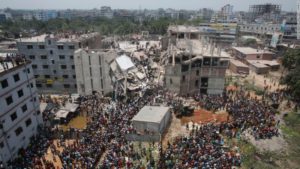 In January 1919 a huge molasses tank containing as much as 2,300,000 US gal collapsed. The collapse caused an enormous wave of molasses between 8 and 15 ft (2.5 to 4.5 m) high, moving at 35 mph (56 km/h). The force of the molasses wave was so powerful it broke to the girders of the adjacent Boston Elevated Railway’s Atlantic Avenue structure and lifted a train off the tracks. Nearby, buildings were swept off their foundations and crushed. 21 people were killed along with 150 injured. 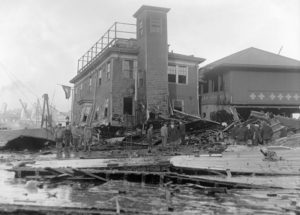 Opened in December 2009, The Vdara Hotel & Spa in Las Vegas offers a unique surprise that neither its’ guests nor its architect expected —a ‘death ray’. The hotels design featured a unique, curved structure, which collected solar rays and beamed them to the hotel swimming pool area. Guests sunbathing nearby were regularly singed, such as Bill Pintas, who claimed that the hotel’s ‘death ray’ had singed his hair and melted his plastic bag. 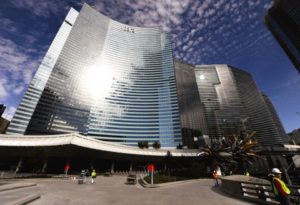 During construction of The Gothard Base Tunnel in 2015-2016, there were 8 deaths. Known as the longest and deepest traffic tunnel in the world, it serves as Switzerland’s new rail link through the Alps. The $10.3bn tunnel will have 94 miles of tunnels, shafts and passages. 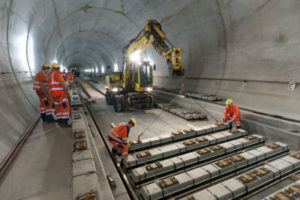 In 2015, a crane toppled over at Mecca’s Grand Mosque killing 111 pilgrims during mass. There were strong sand storms in the region the week before and reports of high winds. Liebherr reports suggested that the boom should have been lowered to avoid the high winds. 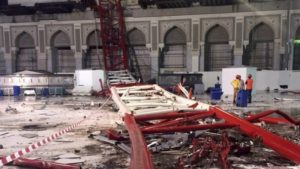